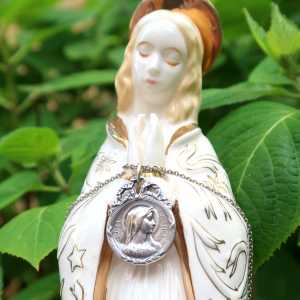 Mother’s Day is right around the corner, and if you’re like me scratching your head wondering what to give mom this year.  A gift card? (too impersonal.)  Flowers? (Wilting and dying may be an issue.)  A small appliance? (That was a joke.)  Why not give your mom a gift that is not only beautiful, but speaks to her faith life as well?  Of course I’m going to suggest a medal from Rosa Mystica Medals!  But maybe you’re unsure what Patron Saint for Mothers is perfect for her… Never fear!  Here are some suggestions for the perfect Patron Saint Medals form moms of all types and temperaments.

St Anne – If your mom did a great job

Was your mom just a great all-around mother?  Do you think she did a great job raising her family?  Then think about St Anne.  St Anne was the mother of the Virgin Mary and grandmother to Jesus.  No pressure there!  She must have been an

amazing woman for God to choose her for such an important job.    She had to deal with infertility and wasn’t able to conceive Mary until she was older than most mothers, but God rewarded her faith and patience with the most wonderful of daughters.

St Monica – if you were a problem child!

Were you a particularly challenging child to raise? Perhaps you gave your mom more than her share of gray hairs?  Then she might relate to St Monica!  Monica was the mother the incredibly faithful and patient mother

of St Augustine.  He stole things, joined a cult, had a mistress, and fathered an illegitimate child, but at age 31 he finally converted to Christianity and became one of the greatest theologians of all time.  And who did he credit for his conversion?

His mother and the prayers she continually offered up for him while he was busy “finding himself.”

St Rita – if your mom is a peacemaker

Was your mother always the peacekeeper of the family?  Maybe she could relate to St Rita.  To put it mildly, St Rita had to deal with more than her share of problems in the home.  Her sons were mean to her,

and her husband was a violent man who cheated on her; but she dealt with every difficult situation with prayer and faith in God.  When her husband was killed by political enemies, she worked to establish peace between the warring families of

Cascia, Italy, and was rewarded by being allowed to enter a monastery where she could finish her days in peace.

St Martha – if your mom is the homemaker.Does your mom delight in having the family over?  Does she show her love with a delicious meal and inviting

home?  St Martha also found joy in making her home a peaceful and inviting place to live, and she had the good fortune to be one of Jesus’s best friends!  So you can understand why she became impatient with her sister, Mary, when Mary wouldn’t get up to help serve the wonderful meal she had prepared for Jesus’s visit!  Jesus told her to wait just a minute – Mary was busy listening to Him and she should take some time to enjoy his company as well, but I’m sure He helped with the dishes once dinner was over!

Maybe you had an amazing mother who did the hard work of raising you largely on her own.  Then St Helen might be the perfect Patron Saint for her.  Helen rose from humble beginnings to marry Constantius.  Together they had one son, Constantine, who loved his mother very much.  Things were going well until Constantius divorced Helen to marry Theodora – the step daughter of the emperor!  Helen and Constantine made it through the difficult times together, and in the end she triumphed when Constantine became emperor of Rome and bestowed the title of empress on her.  She is also credited with finding many important holy relics, including the true cross of Christ.

St Joan of Arc – if your mother is a strong woman

Has your mom been an inspiration to you?  Does she take on whatever life throws at her and give it her best fight?  St Joan of Arc might be the perfect Patron Saint.  As a teenager Joan heard the heavenly voices of several saints instructing her to go help the king reclaim France from the English. At age 17 she was given a small army and captured the city of Orleans and then went on to have several amazing military victories. Eventually she was captured and sold to the English who put her on trial for heresy and witchcraft.  Joan’s answered her prosecutors with wit and bravery.

The Blessed Virgin Mary – the perfect Patron Saint for all mothers

If you’re still unsure which saint your mother would feel closest to, then why not choose our Holy Mother, the Blessed Virgin Mary.  Not only was

she the mother to Jesus, but she is our mother, interceding for us in heaven with her son.  Your mother won’t be disappointed, and you just might get a star in your crown in heaven for giving her such a thoughtful present.

Win your mom a free Miraculous Medal medal for Mother’s Day!  Follow Rosa Mystica Medals on Twitter or Instagram and then link to us in a comment to enter!  The winner will be randomly drawn from everyone who entered, and will be selected the Monday before Mother’s Day (May 9th) to make sure we have time to mail the medal to the lucky mom!

Previous StoryLet’s take a quiz…How Saint Savvy Are You?
Next StoryHow to Wear Your Saint Medal