St Peregrine was born in 1260 in Forli, Italy.  There was a great deal of religious strife in this area when he was young, and during a popular revolt he struck St Philip Benizi, the papal mediator, in the face.  St Philip calmly turned the other cheek and 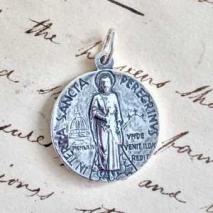 forgave him.  Upon seeing this example, Peregrine was so impressed that he decided to commit his life to good works and began to explore his faith more.

He joined the Servite Order and became a priest.  To atone for his previous behavior, he didn’t allow himself to sit down unless it was absolutely necessary for the next 30 years!He became well known for his excellent preaching, charity, and work with the sick.

He developed an infection in his l 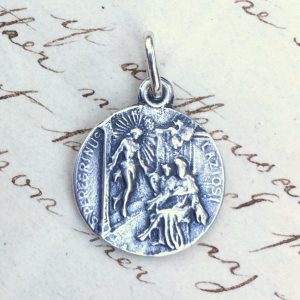 eg which his doctor diagnosed as cancer.  The doctor recommended amputation to save his life.  The night before his surgery, he began to pray before a large crucifix.  In a dream he saw Christ come down form the cross and touch his leg.  When he awoke his leg was completely healed.

St Peregrine died peacefully in 1345 at the age of 85.  He is the patron saint of cancer patients, and his feast day is May 1.  He is frequently shown on religious medals as a man in a monk’s habit that’s pulled back to reveal his leg.

Previous StorySt Monica and St Anne – Two Great Saints for Mothers
Next StoryLet’s take a quiz…How Saint Savvy Are You?