I’m sure we all know someone who has cancer. Maybe even you have it yourself. Sometimes it seems like this illness is everywhere. These are a few of the people I know who have been affected by this disease and whom I pray for every day – our former babysitter who as a young mother has developed breast cancer, my neighbor with incurable bone cancer, the little girl from my preschool who is valiantly fighting neuroblastoma, and my own son who was diagnosed with melanoma last summer. 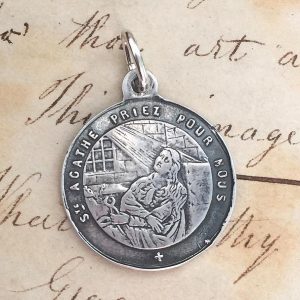 Since June is cancer awareness month, I wanted to focus on two saints who are known as powerful intercessors against cancer.St Agatha was a young Roman woman who refused to deny her faith and marry a Roman prefect named Quintianus. Being a man of power, he was able to use any means at his disposal to punish her, including having her breasts cut off with pincers. This horrible fate has made her known as the patron saint of breast cancer sufferers.

St Peregrine was a brash young man who had a religious conversion and became a priest. He developed a cancerous lesion on his leg; but the night before his surgery Jesus appeared to him and healed him. He is famous for his powerful help for people who suffer from cancers of all types.

In closing, I found this beautiful prayer to St Peregrine online and wanted to share it:

A Prayer for St. Peregrine’s Intercession

O great St. Peregrine, you have been called “The Mighty” and “The Wonder-Worker” because of the numerous miracles which you have obtained from God for those who have had recourse to you. For so many years you bore in your own flesh this cancerous disease that destroys the very fiber of our being, and who had recourse to the source of all grace when the power of man could do no more. You were favored with the vision of Jesus coming down from His Cross to heal your affliction. Ask of God and Our Lady, the cure of the sick whom we entrust to you. (Pause here and silently recall the names of the sick for whom you are praying) Aided in this way by your powerful intercession, we shall sing to God, now and for all eternity, a song of gratitude for His great goodness and mercy. Amen.